Raccoons (Procyon lotor) are common throughout Santa Clara County and Santa Clara County Vector Control receives an average of 350 complaint calls a year on raccoons. Raccoon are well adapted to urban areas and live in greater numbers in cities than they would in the wild. They range from 20-40 inches long, including a bushy tail with 4 to 7 black rings. Adults weigh 12-38 lbs. The fur has a salt and pepper appearance with the black mask markings on a whitish face characteristic of the species. The tracks of the raccoon are very distinctive. The hind foot is long and narrow resembling a human foot. The front paw is hand-like, with toes that are long and well separated. Raccoon can make a wide range of vocal sounds from chirps, growls and purring sounds.

Breeding season is February and March, but mating may occur from December through June. The gestation period is about 63 days. Most litters are born in April or May, but some females may not give birth until June, July, or August. Raccoons produce one litter per year. The average litter is 3 to 5 kits. The offspring are weaned between two and four months of age and usually stay with the female until the following spring.

The diet of the raccoon is very diverse. They will eat fruit, berries, grain, birdseed, eggs, poultry, vegetables, nuts, mollusks, fish, insects, rodents, carrion, and pet food. Individual animals may learn to use specialized foods such as crops, small livestock or garbage by watching other raccoons. It is a common myth that raccoons always wash their food in water. They are fully capable of eating dry pet food where water is not available.

Raccoons are nocturnal, however urban raccoons will come out in the daytime to eat if pet food is available. They are also territorial, particularly the males. This can be a cause of fights between raccoons. Adult males may occupy areas of 3 to 20 square miles; females have much smaller territory of 1 to 6 square miles. Raccoons den up in hallow trees, drain pipes, buildings, and under decks and sheds.

Raccoons can cause substantial damage. In urban areas they damage buildings, by tearing vent screens or shingles to enter. Once inside they can damage heating ducts, insulation, wiring and sheet rock. Flea problems are common at locations were raccoons live.

Fishponds are very attractive to raccoons. They will enter shallow ponds and water dishes destroying plants and fish. Fish are often found with their heads chewed off of the body while neither part was eaten. Raccoons are very strong and can overcome any attempt to cover ponds.

Lawn damage is cause for frequent complaint to the District. August is usually the start of this seasonal behavior. One or more raccoons will visit lawns for the purpose of "grubbing ". Looking for grubs and other insects will cause raccoons to pull back large portions of lawn. Grubbing activity leaves large sections of lawn looking like a sod cutter has been used to remove turf. This behavior occurs in this county from August to December. Biologists believe the behavior is driven by the onset of fall. At this time of year many young raccoons are responsible for finding their own food. All raccoons are driven to double their body weight in preparation of winter. 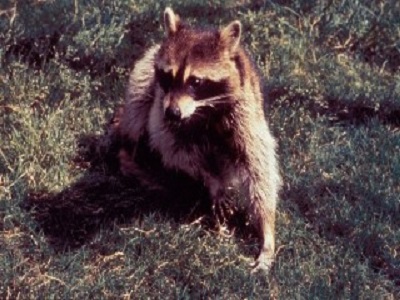 Raccoons can cause serious injury if they attack pets or people. Reported attacks are rare.

Raccoons are attracted to urban areas due to the availability of food, water and shelter. Reducing or eliminating these factors will encourage raccoons to leave. Tight fitting lids should be kept on garbage cans. Gardens should be frequently harvested and windfall fruit picked up.

Never leave pet food outside! Almost all of the raccoon complaints received are problems created when raccoons found access to pet food. Keep pet doors locked at night. Food should never be left out for wild animals. Do not attempt to feed or approach raccoons.

Raccoons causing lawn damage may be encouraged to leave by controlling grub worms or other insects that they eat. Watering lawns in the morning and keeping lawns from being saturated will make them less inviting to raccoons.

Electric fence wires are the most effective way to solve raccoon damage problems to lawns and fishponds. They can control large numbers of raccoons effectively and control is immediate upon installation.

There are no registered chemicals or poisons to control raccoons. Repellents such as mothballs, hot peppers, ammonia, soaked rags, lights or radios have not proved effective.

Santa Clara County Vector Control has Wildlife Specialists on staff that can provide you with further information or assistance in solving raccoon problems.​​